Ryan Spicer joined Sawmill Creek Golf Club in the fall of 2005. Ryan has been a PGA member since 1992 and got his start in the golf business as an Assistant Golf Professional at Zanesville Country Club. He has served as the head Golf Professional at the GolfWorks in Newark for four years and Thunderbird Hills in Huron for eight years. Ryan graduated from West Muskingum High School and Ohio University where he played four years of college golf. 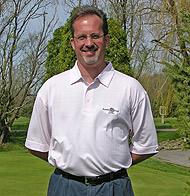 Ryan Spicer took up golf at the age of 8 after being introduced to the game by his father. He excelled during his Junior and High School years and later attended Ohio University where he played four years. Spicer has coached golf at the High School level for 17 years for the boys and girls golf teams at Margaretta High School in Castalia, Ohio. He and his wife, Karol live in Castalia with their 3 children, Rian, Austin and Eryn.

Spicer began his Professional career as an Assistant Pro at Zanesville Country Club, where he became a P.G.A. Member. Currently he is the Head Golf Professional & Director of Golf here at Sawmill Creek Golf Club in Huron, Ohio.

"I've always enjoyed working in the golf business. Sawmill Creek has been a wonderful opportunity for me. A highlight for me in the golf business was being awarded the Merchandiser of the Year for a resort by the Northern Ohio P.G.A. in 2014 & 2016."